Inventor of Telephone : The History 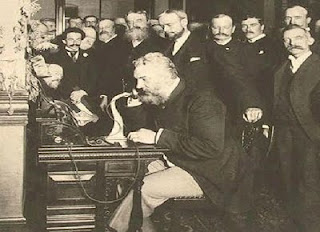 Telephone history starts at the beginning of human history. As at that time also human tried to communicate with each other by smoke signals, mirror signals, carrier pigeons etc.Telephone comes from the Greek word “Tele” means afar and “phone” which means voice or voiced sound.Generally, telephone is a device which transfers sound mainly the human voice over a distance. Probably nothing except telephone has revolutionized the ordinary human communication from one place to another considered the distance is long. Telephone is a device which converts the sound specially the human voice into electronic impulses and transfer’s the impulses back to a tone which is just like human voice. 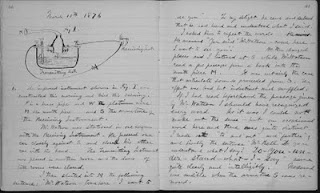 If we start from the very beginning then in 1753 physician Charles Morrison, wrote in a magazine named Scot’s Magazine that electricity might transmit messages. His thought was to use different wires for different letters. Which turns out the idea of telegraph? After that experiment continues but in a slow version. Also the equipments were not that much rich to run the experiments.
After that 1800 Alessandro Volta invented the first battery .This battery sustained low power but the cost was high. After that quick development was made on this battery and this battery became the most important and common source of further experimenting in this line.
In 1820 Danish Physicist Christian Oersted discovered the phenomenon electromagnetism. While doing one experiment in his university named University of Copenhagen Oersted  pushed a magnet under a live electric wire and the magnet turned in pointing north as if the electric wire is acting like a large magnet.Which made him think that an electric current produces magnetic field.But the question that was his mind was is this possible to create electricity using magnetic field.If it is possible then a new era of communication will began.
In 1982 Michael Faraday reversed Christian Oersted’s experiment and found the phenomenon induction. He got a flow of weak current in a wire revolving around a permanent magnet. Which proves a magnet field can cause a flow of current. Using this principle Faraday invented world’s first magnetic generator. At that time it is proved that mechanical energy can be converted to electrical energy.
The modern telephone is an invention in which many people have many contributions. This is not a credit of any individual. But the main structure, circuit design and the purpose which telephone does the transmission of voice, this was invented by two people independently.
In the year 1831 Michael Faraday invented and proved that vibrations of metals are convertible to electrical impulses. This was the technological base of inventing telephone.
In 1861 Johan Philip Reis is Germany was able to convert metallic sounds into electrical signals and then convert it back to sound from electrical signals. But while transferring most the frequencies were missing.So,the development of the device was not continued.
In the 1876’s Scottish-born Alexander Graham Bell and Elisha Grey, this two inventors independently designed one device through which speech can be transmitted electrically (the telephone) from one place to another by converting the speech first into electrical signals and then again turning this back into speech.
Alexander Graham Bell was a professor of vocal Physiology at Boston University. Bell was a training teacher to train the deaf mutes how to speak and was experimenting with the Leon Scott phonautoraph( the early known device to record sound) to record the vibrations of speech. This device contained a thin membrane on which the vocal vibrations were recorded. This background of recording voice prepared and inspired Alexander Graham Bell to work with the vocal speech or sound waves and electricity.
Alexander Graham Bell of Scotland is well known as the inventor of first practical telephone. The fist practical telephone call was made on 6 th march,1976. The story of his crying out ,”Watson, come here! I want to see you!” is very familiar in American History. Watson was his assistant who was in another room. Watson was able to hear the request through a receiver connected  to the transmitter of the device that Alexander Graham Bell was designed. The incidence followed after this was forming the Bell Telephone Company (later AT&T),which turns into the largest telephone company in the world. Alexander Graham Bell in 1876 was first able to transmit vocal or other sounds telegraphically.
The telephone system which connects between many people who have telephones through wires was called as exchange. This exchange was first installed in the city of Hartford, Connecticut in the year 1877.New York and Boston were the first two cities which were connected via this telephone exchange practically in the year 1883.In 1879 the fist exchange outside the united states was established in London. The exchange were operated manually and a large group of technical workers were responsible to operate a large switch board. The operators working in the exchange at first received the incoming calls and connected to the called party.Almon Stronger of Kansas first made the automated telephone exchange and then the calls were connected in the exchange automatically without any manual touch.This automatic exchange was first installed in 1892.
The Telephones operated by coins were invented my William Gray at Hartford in the year 1889.The first telephone in which the dialing was done by rotating by numbers was first implemented in the year 1923 by Antonie Barnay in France.
In the early 1960 the low price of associated circuits and transistors insisted the making of touch tone telephones.For this  in this year the touch tone system in home telephone was possible.This speeds up the dialing to a great extent and was much more easier to use.The first commercial touch tone phone was launched in the Seattle world’s fair in 1962.
In earlier days telephone carbon was used in handsets.Modern telephone does not use carbon in their handsets.Modern days telephone use in the transmitter side electrets microphones and in the receiver side piezoelectric transducers are used.But the principle is same as the old days telephone.Sound waves picked up the transmitter that is electrets microphones causes a thin vibration in the metal –coated plastic diaphragram to vibrate.A piezoelectric transducer uses the material which converts the mechanical stress into electrical signals.