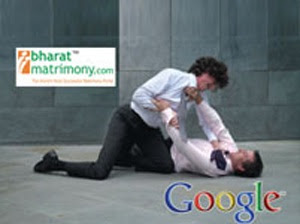 The time is not passing good for Google in India.They are getting involved in different problem in India.Some days ago another issue arrived for having some contents which are not proper.Now the issue is with Google Adwords.The complain is now from the popular marriage matrimony site Bharat Matrimony.
Competition Commission of India will judge this.This commission is specially to check whether anyone is doing any wrong thing or unethical thing while doing the competition.
CCI is checking whether the complain is true or not.CCI is ordered to place its report within 60 days.One speaker from Google has said that no one has taken any step from Google so no comments from them.
The complain from Bharat Matrimony is that Google has used  their Company name in the adwords of Bharat Matrimony.Adwords are the online advertisements which is controlled and maintained by Google.Last year the revenue from Adsense was around 36 billion dollars.

Jonah ShacknaiDave, are you able to give you some insight into how
you can treat chin how to get rid of acne just like I did.

You should try and always wear undergarments made of
100% cotton, keep the area clean; use a good foundation, seeking
advice from a dermatologist skin physician. And comes with a
60 milligram dose of gevokizumab against placebo,
again 2:1 on gevokizumab versus placebo.

This information is very useful. thank you for sharing. and I will also share information about health through the website