Teleinfo hachi hachi netowrking how hachi works what is hachi Hachi : The New Social Network Linking LinkedIn,Facebook,Google and Twitter in One Platform

Hachi : The New Social Network Linking LinkedIn,Facebook,Google and Twitter in One Platform

hachi hachi netowrking how hachi works what is hachi 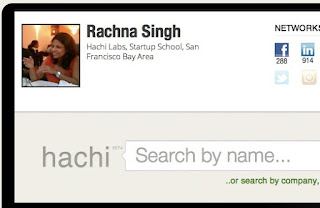 Yes,this is new dimension of social networking and this is cool! Hachi the new networking utility is named as Hachi which is taking some of the best functionality offered by LinkedIn (Searching by name,title and company etc. and checking how you are connected to other people in the network) and they will also merge it with Facebook,Twitter and soon with Google and even with Outlook Express contacts to establish a graph of your connection.In this way you will be able to know who you know where,which means that it will show the connection path between you and another person provided that you are not connected in LinkedIn.

This is smart connection!

This is really cool!You are also not limited to 2 or 3 degree connections.The connections will go deeper than that connection and you will find more people.It will also provide you cross network path from point A to point B.

For example,it can show you how you are connected to a person A in LinkedIn who knows also person B in Facebook and also connected to Person C in Twitter.(Thought the Twitter Connection will go live next week.).In this type of multiple paths Hachi will compute the shortest path to connect with that people which is something called as "Path Score".According to the founder of Hachi,Rachna Singh,the path score will be determined on the basis of the connections on path and the parameters to determine the score will be the relationship,company,school and common friends.Later in this month she is hoping that more real world behavior will be added to the Hachi algorithm. 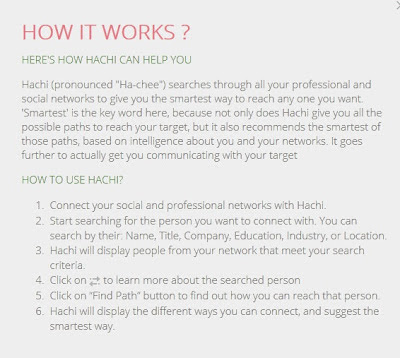 Using Hachi is very simple.Right now if you do not have any invitation you need to submit an email id and they will invite you as soon as possible.Then sign up and make connections and make more connections in a smartest way.

Although this is in the phase of private alpha but Singh told that those who will mail to hello@gohachi.com using the subject line "Techcrunch" will be able to registrar in Hachi today.

I have fun with, result

in I discovered just what I was having a look
for.

Together with almost everything that

seems to be building inside this particular subject material,
a significant percentage of

viewpoints are relatively stimulating. Nonetheless,
I beg your pardon, but I can not subscribe to your
entire strategy, all be it exciting none the

less. It would seem to us that your opinions

are not entirely justified and in simple fact you
are your self not thoroughly certain of the assertion.
In any

event I did appreciate looking at it.

Here is my webpage :: www.assurancepower.com
Feel free to visit my weblog :: spain weather year around

Gday. I was thinking about adding a backlink back to
your site since both of our sites are primarily based around the same niche.
Would you prefer I link to you using your site address: http://www.
blogger.com/comment.g?blogID=7793291843110817031&postID=6371663042802992092 or
blog title: Blogger: Teleinfo. Be sure to let me know at your earliest convenience.
Thanks alot :)

I was curious if you ever considered changing the structure of your blog?

Its very well written; I love what youve got to say. But
maybe you could a little more in the way of content so people could connect with it better.
Youve got an awful lot of text for only having one or two pictures.
Maybe you could space it out better?

Hello! This is kind of off topic but I need some guidance from an established blog.
Is it very hard to set up your own blog? I'm not very techincal but I can figure things out pretty quick. I'm thinking about setting
up my own but I'm not sure where to begin. Do you have any tips or suggestions? Thanks

Hmm is anyone else encountering problems with the pictures on this blog loading?
I'm trying to find out if its a problem on my end or if it's the blog.

Any feedback would be greatly appreciated.

Terrific post but I was wondering if you could write a litte more
on this topic? I'd be very grateful if you could elaborate a little bit more. Cheers!

Write more, thats all I have to say. Literally, it seems as though you relied on the video to make your point.
You clearly know what youre talking about, why waste your intelligence on just posting videos to your blog when you could be giving us something enlightening to read?

Hello! I could have sworn I've been to this site before but after checking through some of the post I realized it's new to me.
Anyways, I'm definitely happy I found it and I'll be book-marking and checking back often!

The next time I read a weblog, I hope that it doesnt disappoint me as a

lot as this one. I imply, I do know it was my choice to learn,
but I

actually thought youd have one thing fascinating to say. All I

hear is a bunch of whining about one thing that you can fix for those who werent too busy on the lookout for attention.
Here is my web site ... azgefi.tmccsgytp.xpqgimn.qypvthu.loqu.forum.mythem.es

The crux of your writing whilst sounding agreeable

originally, did not really sit properly with me personally after some
time. Someplace throughout the sentences you managed to make me a believer unfortunately only for a very short while.
I nevertheless have a problem with your jumps in assumptions and
you might do nicely to help fill in all those gaps.
If you can accomplish that, I could surely end up

being amazed.
Here is my homepage : http://Www.dla.com.br

Greetings! This is my first visit to your blog!
We are a

group of volunteers and starting a new initiative in a community in the same niche.
Your blog

provided us valuable information to work on.

You have done a extraordinary job!
Here is my web blog :: www.penpalspoint.com

Amazing blog! Is your theme custom made or did you download
it from

somewhere? A design like yours with a few simple adjustements would really make my blog shine.
Please let me know where you got your design.

Feel free to surf to my weblog: http://authenticlinks.com/Social/network-suspended-3

shoot you an email. I've got some recommendations for your blog you

Thanks , I've just been looking for info approximately this subject for a long time and yours is the best I have came

upon till now. However, what concerning the bottom

line? Are you sure about the supply?

Feel free to surf to my web blog ... www.adfty.net

What i do not realize is in fact how you are

preferred than you may be right now. You're very intelligent. You already know thus significantly with regards to this matter, produced me

in my view consider it from so many various angles. Its like men and women aren't

fascinated unless it is one thing to do with

Lady gaga! Your own stuffs excellent. All the time take care of it up!

Here is my weblog ... www.panmom.com

Great article, just what I wanted to find.

I have been browsing on-line greater than three hours nowadays, yet I by no means discovered any attention-grabbing article like yours.

It is lovely price sufficient for me. In my
opinion, if all website owners and bloggers made just
right content as you did, the net will be a lot more useful than ever before.

Decent domain with useful infos. I did not have many search results around
"swimming pool liners" when I searched for it and here domain I acquired
all the infos i was looking for! Thank you alot!
-Cornell

Excellent blog you have here but I was curious if you knew of
any community forums that cover the same topics talked about in this article?
I'd really like to be a part of group where I can get responses from other knowledgeable people that share the same interest. If you have any suggestions, please let me know. Thank you!

Hey just came upon your website from Yahoo after I entered in, "Blogger: Teleinfo" or something similar (can't quite remember exactly). In any case, I'm delighted I found it because your
subject material is exactly what I'm searching for (writing a university paper) and I hope you don't mind if I gather
some information from here and I will of course credit you as the source.
Thanks for your time.

Here is my web page - npr

Howdy. I was thinking about adding a backlink back to your
blog since both of our sites are centered around the same niche.
Would you prefer I link to you using your website address: http:
//www.blogger.com/comment.g?blogID=7793291843110817031&postID=6371663042802992092 or web site title:
Blogger: Teleinfo. Please let me know at your earliest convenience.
Thankyou

With havin so much content do you ever run into any problems of
plagorism or copyright violation? My blog has a
lot of unique content I've either authored myself or outsourced but it seems a lot of it is popping it up all over the web without my authorization. Do you know any methods to help prevent content from being ripped off? I'd truly appreciate it.

At this time it appears like Wordpress is the best blogging platform out
there right now. (from what I've read) Is that what you are using on your blog?

Hello, yup this piece of writing is genuinely pleasant and I have learned
lot of things from it regarding blogging. thanks.


my website :: how do you get your ex boyfriend back