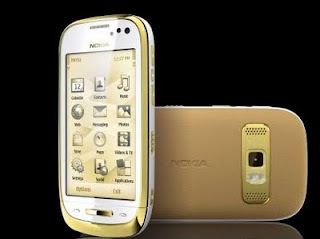 Nokia has shown off a gold plated smartphone, the Nokia Oro which it says it will sell in a few selected markets. The Symbian based phone incorporates 18-carat gold plating, a sapphire crystal and Scottish leather on the back.
The design and pricing - at EUR800 - puts it in the middle point between a standard Nokia phone and Nokia's premium brand, Vertu.
Functionality wise, it is a 3G phone with Wi-Fi and a 3.5-inch AMOLED display, an 8-megapixel camera with 720p video recording and all the rest.
Nokia said that the Oro is a device that's clearly intended for someone who doesn't want their mobile device to look the same as other peoples. The main markets for this sort of device are the Middle East and Russia, where they have been best-sellers for some time.
Materials Designer Robert Lihou noted: "Our aim was to use the best materials for the purpose. It's coated with 18-carat gold which has been made scratch-resistant. The leather is from premium Scottish stock. That's a real sapphire crystal in the home key, which makes it eight times sturdier than glass."
Nokia Oro will start selling in selected countries across the Europe, Eastern Europe, China and the Middle East from July.