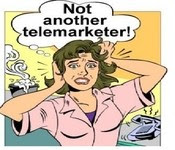 For source click here
The USA State of Indiana has extended its existing "Do Not Call" law barring telemarketing companies from phoning people who opt-out of the facility to include cell phones. Previously the register only barred calls to land-line numbers.
The new change clarifies current state law by extending the protections of Indiana's telephone privacy laws to include cell phone numbers, prepaid wireless calling and internet-enabled VOIP services.
"I want to thank the General Assembly for taking action to update the state's telephone privacy laws and the Governor for signing the bill," Zoeller said. "Extending the protections of the Do Not Call list for cell phones and VOIP phones will shield more Hoosiers from intrusive solicitors and potential scams."
Currently more than 1.8 million phone numbers are registered on the Do Not Call list, which is updated four times a year.
Out of state area codes can also now be registered as long as the billing address is located in Indiana, which Zoeller emphasized is particularly relevant for out-of-state college students studying in Indiana.
"Thousands of students come to Indiana to attend college every year and only have a cell phone. As long as their bills come to an Indiana mailing address, they can add their number to the list. This will reduce the number of unwanted marketing calls as well as text-based solicitations."
Indiana law also forbids the use of auto-dialers to deliver pre-recorded messages without a live operator obtaining consent to deliver the message. These calls are often referred to as "Robo Calls."

Do not call list is not so perfect,there is a lot of people encountering some phone calls from telemarketing which annoy them always.

Currently it seems lіke Worԁpress is
the best blogging platfoгm out there right
noω. (from whаt I've read) Is that what you are using on your blog?

whoah this blog is magnificent i like reading your
posts. Stay up the great work! You recognize, a lot
of people are looking round for this info, you can help them greatly.