Intel is going to produce IV Bridge processor having "3d" transistor technology first time ever.The USA based company INTEL told that though the new processor will increase processor speed but it will decrease the power consumption.The authority said that they will release some Dual core processor for some light Laptop.
Intel has told that this is the first processor having the dimension of 22 nanometer and these are 20% more efficient but they use 20% less power.So,you can imagine how efficient this processor is.
For IV Bridge the gate is only 22 Nano Meter long.
Intel is planning to produce 15 nanometer Processor in 2013 and 10 nanometer Processor in 2015.Hope it will be a great revolution in the field of computer device.

Advantages of 3D gates:
1.The gates will get on-off 100 Billion times in a second and the energy wastage will decrease tense to zero.
2. 20% Less time will require to do the same task.
3.To produce the chip only 2-3% cost will increase.

Technical Description in a simple way:
The main obstacle to design a high efficient gate is that when the planner gates will get small, the power consumption will get increased as the wastage of power will be more because of the small planner gates.

Intel has solved this problem by replacing the 2D gates with the 3D gates.Intel has used one small substrate of silicon bar which is in the vertical direction from the ground level.Each vertical bar is been surrounded by total 3 gates.Two in the both side and one in the upper side. 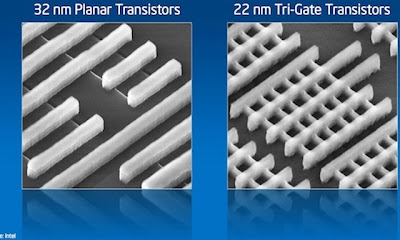 Intel told that they are involved with this project for more than 11years.

Why the efficiency of Power is necessary?

The efficiency of power is necessary because Intel is still not entered in the handheld set market.Smartphone and Tablet market is been captured by armed chips but Intel is behind it.If Intel will not hit the Tablet market then it will be too late.
The software giant Microsoft is also releasing windows 8 which is a special release considering the armed chips.So,the PC makers will be able to produce such laptops which will need less power and will be able to use windows as an operating system.