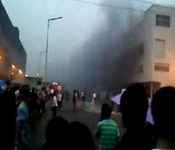 Source
An explosion and subsequent fire has damaged part of the Foxconn factory in Chegdu, China where a large number of Apple's iPad 2 is being manufactured.
News reports suggest that 2 employees have been killed and 16 injured, of which three are said to be serious.
The explosion took place at 7pm local time when workers were swapping shifts, the micgadget website reported, citing the Sina.com discussion forums.
Footage filmed by local television crews and eyewitnesses depict thick black smoke rising from the Foxconn's Chengdu manufacturing facilities. At least a dozen fire engines can be seen at the scene attempting to extinguish fire.
In addition to the very serious human loss from the accident, the move could impact on deliveries of Apple iPads, which are already said to be strained due to component shortages following the Japanese tsunami.